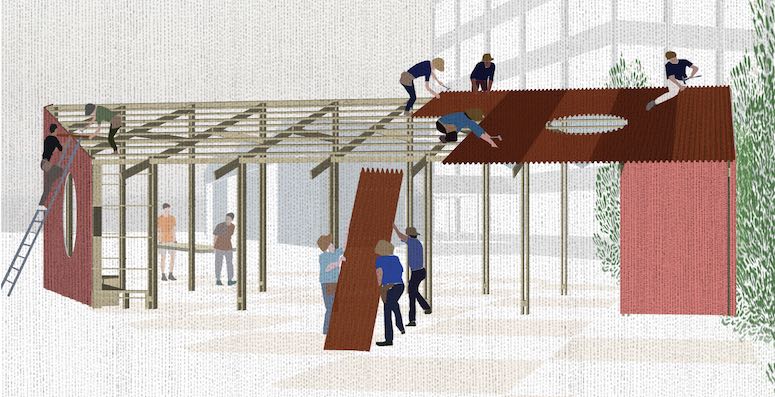 The character of the pavilion references the industrial roofs structures that are characteristic of the Harringay Warehouses. The pitch of the roof is similar to that of the sawtooth roofs, while the corrugated sheeting is a familiar material within the district. However, perhaps more importantly, the project connects to the Warehouse District through the ambition to utilise the rich array of creative skills, resources and enthusiasm the warehouse community and volunteers offer. We hope to work with the community to organise a number of events during and after construction, which reach out to the wider community.

Gentrification is often unsuccessful when it neglects existing local residents and community‚Äôs; land is developed to maximise density, and civic gestures are reduced to meet basic planning requirements. Our project opposes this by placing the local community at the front and centre, highlighting the need for their presence in the future growth and redevelopment of Tottenham. Our proposal for ‘A shared hall & the festival of making’ allows for a fantastic opportunity to utilise the skills, resources and enthusiasm of the volunteers of the warehouses, and to engage with local groups and the wider community beyond the Warehouse district. The project is inspired by the old market halls and clock towers, which are often found in the centre of market towns, and represent the ultimate civic gesture. Forming a notable location at the centre of a community, they provide a place for people to meet and socialise, as well as host a sequence of organised events such as markets, civic celebrations, concerts and speeches. We see this as a good example of a ‘shared hall’, flexible in its use but civic in its presence. Our proposal interprets this, placing a generous shared hall in the middle of the site, which articulates two different spaces either side. It is orientated toward the street, following the grain of the terraces along Seven Sisters road and forming a strong gable end facing the Eade road. Externally, the striped roof is an expression of the celebratory nature, whilst internally it forms a decorated ceiling. A marker located at the entrance to the site acts as a gatehouse through which visitors enter. At night it glows as it’s lit from inside. It is visible for passers by on the New River Path and provides a starting point for the row of terraces along Seven Sisters road and marking the southeast corner of the Warehouse District.

The most integral aspect of the proposal is the sequence of engagement events over 4 weekends. We aspire for the project to engage with the wider community, from construction to when it is in use. We propose to work with the warehouse community to curate ‘festival of making’. The festival is a sequence of community events and workshops that follow the key phases of construction. We will work with local groups to design specific events and workshops associated with each phase. The events will focus on sharing knowledge, upskilling, play and enjoying the coming together of groups. The act of building together as a community can begin to trigger interest and inform people on the wider topic of the built environment, as well as be a catalyst for fostering new connections and relationships.

When the ‘shared hall’ is in use, the simple plan allows for flexibility in its use and occupants, hosting an array of organised events such as markets and concerts, as well as opening its doors for other local organisations to enjoy the pavilion as they see fit.

(Only works for registered voters users who are logged in)