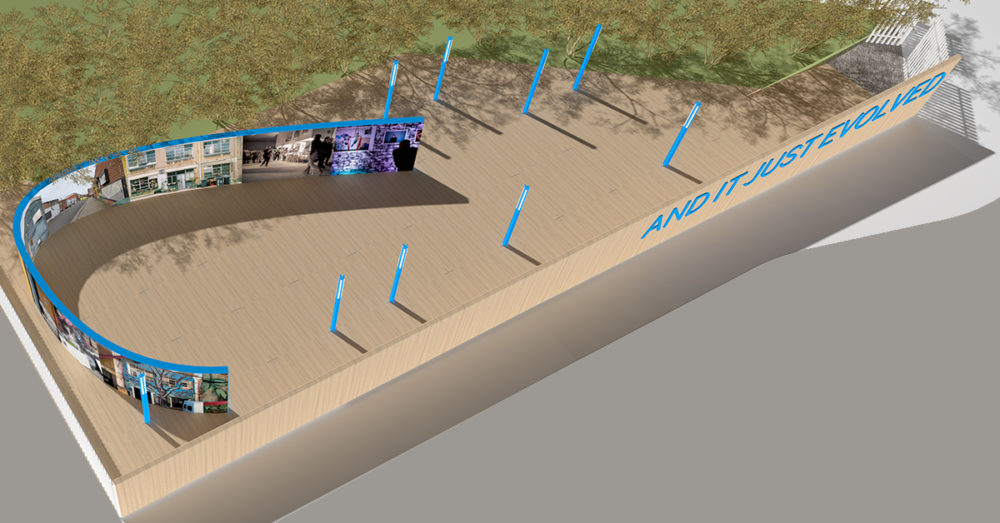 My project started from what seemed to me a contradiction. During our visit to the Harringay Warehouse District, James and Carolina explained how the community took shape in a kind of spontaneous way, slowly transforming industrial premises into residential and mixed use. What characterised this process was the “fluency of freedom”. The people living there started to give shape to the place in an unplanned way “and it just evolved”, as James put it. So, why were they now asking to someone not belonging to the community to design their pavilion? Wasn’t it a contradiction to ask for a project?

Fluidity of freedom had to be the antidote to gentrification.

I set out to design a place that could reflect the fluency of freedom and at the same time provide a record of the evolution of the Harringay Warehouse District, a place that could show what this community has achieved. A stage for it. The place itself had to be able to physically evolve, allowing changes, additions, subtractions, replacements. And if necessary, it could even be taken down with a sledgehammer, like James did with his kitchen.

Four primary elements define and articulate the space: the Diorama, the Welcome Wall, the Podium and the Posts. The material throughout is hardwood plywood. The uniformity of the material throughout the pavilion strengthen the concept of a neutral space with a strong personality but at the same time providing a backdrop for any type of activity.

DIORAMA: The curved pywood structure is covered with images from the past, the present and the future of the Harringay Warehouse District. The evolution of the area is documented through posters pasted over the curved wall, layer by layer, with a process that echoes the transformation of the district throughout the years. It is also the backdrop for events, shows, and concerts. The posters can be pasted on the wall with the same technique of the advertising billboards.

WELCOME WALL: The existing metal fence cannot be removed. A new plywood structure covers and hides it becoming an integral part of the pavilion rather than separating it from the city. This is a pavilion along the street and not a pavilion behind bars. The rounded top invites in rather than pushing away. Inside the pavilion the bottom of the Welcome Wall bends softly to become a long seating.

PODIUM: The raised floor made of 2400x1200mm plywood sheets defines the boundaries of the pavilion’s open space. Being on it is being inside the pavilion. On the Podium floor there is a grid of cross-shaped slots where the Posts can be inserted allowing hundreds of possible configurations.

POSTS:
The Posts are removable elements that support lighting and potentially many other things like fairy lights, banners, textiles dividers, projection screens, artworks, etc. The Posts are made with two intersecting plywood boards and a steel foot that goes inside the floor slots.