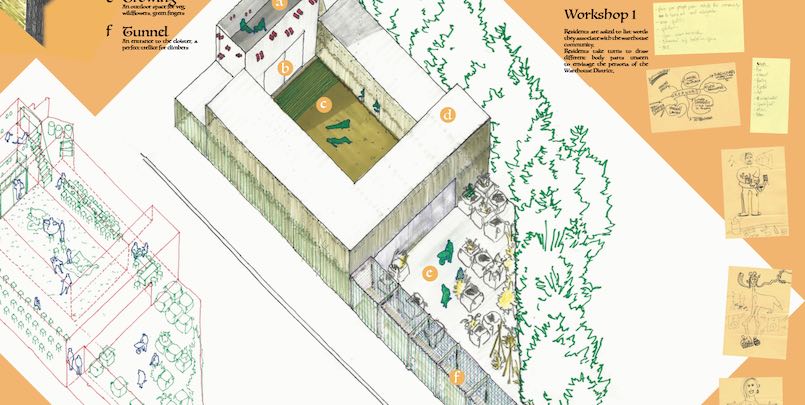 By Remedy & Residents of Catwalk Place

Our proposed design voices one of the most unique elements of the Warehouse District: its tension between private and public, seen and unseen. We have developed a structure which is both an enclosure, exploring the courtyard and cloister as a space for communality, collectivity and privacy. However this structure is dressed in materials which enable transparency and visibility to the wider area, to Seven Sisters Road and Eade Road. Articulating a relationship the Warehouse District has with itself and with its wider borough of being visible, overt and unapologetic whilst remaining hidden, spared the worst of a wider, rising gentrification.

Covert and Communal has been developed in collaboration with residents of Catwalk Place. This process began in March through a series of workshops. The first workshop asked residents to personify the warehouse community and to generate words which they associated with the Harringay Warehouse District. The second workshop asked residents to sketch spaces or activities they would like to see on the Tottenham Pavilion site, what they thought the area was lacking and what was worthy of celebrating. The words ‘hidden’ and ‘liminal’ recurred in conversation, as did a great deal of humour. The spaces residents conjured involved parties, eating and dining together, organising politically, sharing culture and a pining for green space. Remedy took these ideas and actions and synthesised a design which we feel responds to the area and provides for it in a way which does not expose it to gentrification.

The first elements of the Covert and Communal proposal for the Eade Road site are the green and growing spaces. These will be the first things to be installed on site and will be tended to and left to mature. Ton bags of soil will be left in situ as growing beds for vegetables and wildflowers, a nod to the soil bags which were given to the community at the start of the Covid-19 isolation period. A rectangular lawn occupies the central portion of the site, a valuable green and comfortable space for relaxation and performance.

The built proposal takes the form of an augmented cloister. Using the existing green and white Palisade fencing as a critical boundary for dialogue, a horseshoe cloister runs along its length and around the lawn. This cloister is an external space consisting of a timber primary structure with aluminium chain curtains affixed to its sides to form an enclosure, roofed with box-profile roofing. The chain curtains drape over the existing fencing, enclosing this boundary as part of the cloister and encouraging awareness of the pavilion. The cloister is wide enough for an audience to sit within it and watch a performance or for local residents to dine in during the warmer months. A weatherproof building sits at the end of the cloister – a kitchen – where shared utensils can be used and meals prepared with wider residents and local schools. A rooftop platform – the ‘hide’ – sits above the kitchen, allowing views over the New River through ‘peep holes’ in the structure, a tongue-in-cheek reference to the enigmatic nature of the area. A secondary colonnade, linking the Seven Sisters Road entrance with the cloister is realised in palisade fencing covered with debris netting, providing a softened boundary and entrance to the space.

The material pallet and spatial design has been selected to create a porous and utilitarian aesthetic which provides privacy and a sense of levity and openness, characteristics which define the warehouse community. The effect is to create a pavilion which is unassuming and subdued, yet can throw itself open and breathe life to its surroundings.