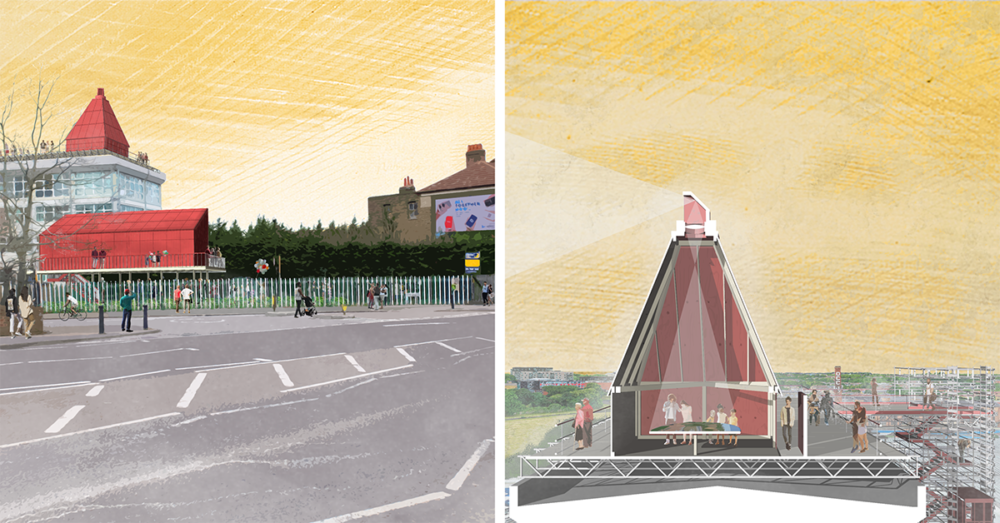 By extending the site and including the rooftop of Cara House, Glowing Still gives the community of the Harringay Warehouse District and the locals of Tottenham unique perspectives of the powers shaping their city. Our proposal combines a gateway pavilion with a rooftop camera obscura to connect to the district, and further to the wider city. We believe that if local communities have the opportunity to explore these perspectives together, perhaps the pavilion has the power to influence the narrative of future development and overcome the threats of gentrification.

London is changing at increasing speed and the powers which shape it are rippling through the Harringay Warehouse District. Glowing Still asks ‘what if the pavilion could manifest the power dynamic of the area, and become a platform for nearby communities to connect and participate with the masterplan of their district and their city?’

The site is characterised by boundaries, at the edge of the borough and with the Woodberry Down Estates, Manor house and the Harringay Warehouse District disconnected by Seven Sisters Road. Each area has its character and community, all of which are impacted by oncoming gentrification. Connecting disparate communities and creating a platform to overcome gentrification requires participation and play.

Glowing Still proposes a gateway pavilion and a rooftop camera obscura on Cara House, together providing new outlooks and perspectives, macro and micro over the city and the local communities.

Glowing Still begins at the corner of the district, with the gateway pavilion sitting proud of the site boundary fence and visitors visible looking out from the balcony and strolling around a community garden space below. Entering the former car park from this corner, you experience a lightweight timber structure in the centre of the garden with stairs leading to an enclosed space. Moving through the garden and upstairs, you are met with a workshop space with a clerestory window offering a connection with the nearby trees and the rooftop Camera Obscura. Around the walls there’s an exhibition of skyline drawings sketched in the Camera Obscura by children and residents of the warehouses and Woodberry Down estates, each sketch showing a vision for the city. Back through the garden and down behind Cara House, a lift provides a gateway to the rooftop, the journey upwards unfolds the diversity of warehouse roofs and projects taking place. Reaching the rooftop, a view North – of the Harringay Warehouse District, and view South – over Woodberry Down Estate and towards the tower of the Skyline Apartments off Seven Sisters Road are now accessible. The perspective atop Cara House reveals the diversity of the surrounding urban fabric, places the district in the context of the city, and the signs of gentrification dotted across the skyline. Entering the Camera Obscura, the darkness of the room gives a moment for eyes to adjust and separates you from your most local surroundings. With a spotlit tabletop, a projected an uninterrupted view of the changing local skyline with the city of London sitting behind is laid out before you, school children from Seven Sisters Primary School are scribbling castles, farms and maybe the odd theme park over Seven Sisters Road as part of a local community project. Returning from the Camera Obscura, you leave with an unexpected perspective of your community and the powers which shape it. Unlike most views of the skyline, you didn’t book a table or a ticket but rather participated in new conversations and workshops about the city – a completely accessible and equal perspective and something that each visitor is a part of.

The site for Glowing Still is the rooftop of Cara house and the former car park site cornering Seven Sisters Road. We believe that to connect the Harringay Warehouse Community with the local community of Tottenham and to those powers which are shaping the city, we believe that the best location for this would be to raise the site up to the rooftop.