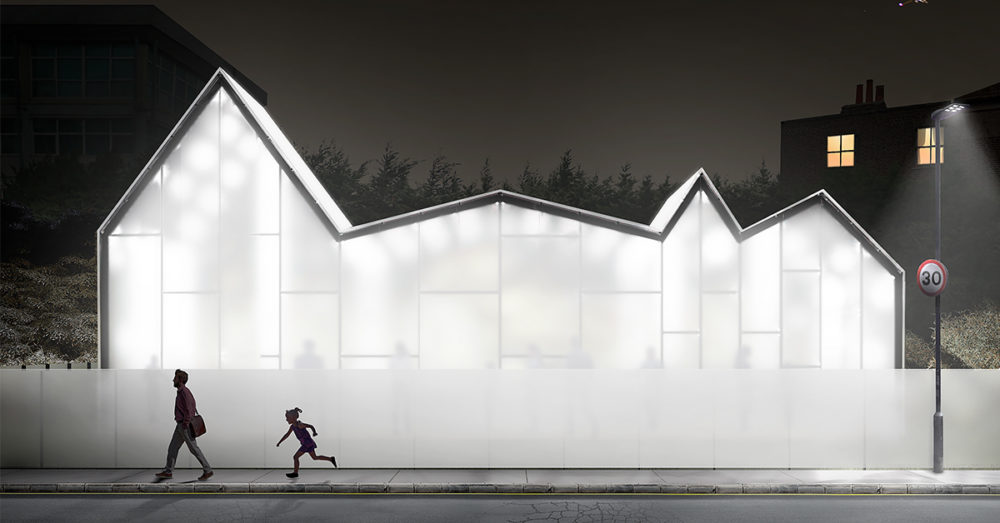 The Pavilion Seeks to be the materialisation of the transition process of the district, from a strictly functional/industrial typology into a creative hub. The form is basically the deconstruction of Harringay’s cityscape, more specifically, inspired by the relationship between semi-detached warehouses and the urban landscape, turning the pavilion into a responsive gesture to the local historic narrative. The site location, between Harringay and New River, requested the building to act as a welcome beacon highlighting the district’s personality and for constant passers, the transition promoted by the local artists, will be visible through the first thirty days.

The design Concept encapsulates the history of Harringay, delivering a silent architectural piece, to be used as an urban manifesto by the local population. The first phase symbolizes the original typology found in the district, romantically inspired by the unique aesthetics of semi-detached warehouses, using lightness and clarity from the translucent materiality to leave room for the users to express themselves, taking us to the final phase, when local artists, representing the new personality of the district, known by its relationship with creativity and art, are invited to guide the building through a metamorphosis into its final aspect. With this proposal, the central idea was that through architecture, we can investigate future possibilities yet also explore the cultural foundations that have defined the city. The Manifesto Pavilion is where the exhibits and building come together at this prominent and historic location to enthuse and inspire all visitors. The design, combining heritage complexity with structural ingenuity and material authenticity, continues Harringay’s rich traditions aiming to become a part of the district’s future as a centre of expression.
The alien materiality of the envelope proposes a relationship of abstraction within the context; bringing a strong symbology in which the pavilion is the voice of its place and its users. The translucent-white hollow polycarbonate sheets are cheap and efficient in filtering light and heat, allowing natural illumination for the workspaces, creating the perfect environment for the workshops without need for electricity. At night, the inner light leaks and the whole structure becomes emissive, providing illumination for the site and for the front walkway, bringing safety for the public environment and assuming its place as an urban activator.
The structure simplicity makes the pavilion easily collapsible, with a preoccupation for a circular construction model in which every structural element can be reused and the pavilion as a whole can be later carried away for another site.
The building, open at opposite ends, has a tunnel-like configuration. creating a journey away from its external context. Here, the internal path within the pavilion becomes a centre of expression, which can either be hermetic or porous depending on the exhibition layout. Thus, the pavilion positions itself symbolically and functionally as open and fluid, engaging its context and content to ensure it is profoundly interlinked with not only Tottenham‚Äôs history but also its future.