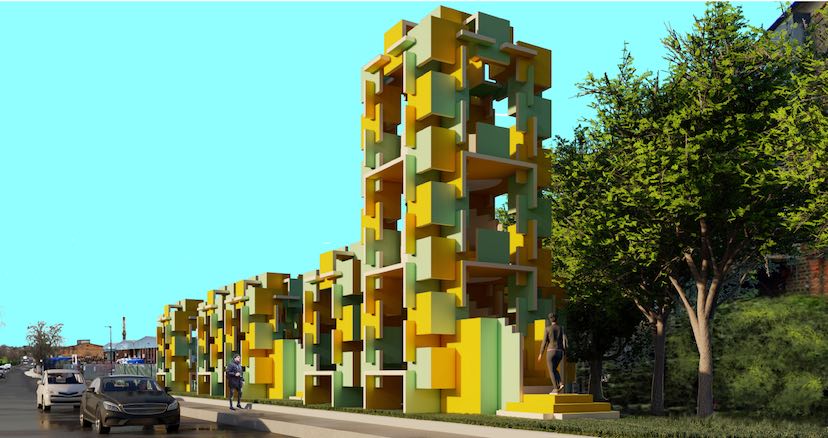 This pavilion comes as a symbol of the values this community shares – adaptability, inclusiveness, quirkiness – and works as a gathering space where people can come together and express themselves. The always changing nature of the site and the people using it calls for a modular construction that can be put up, reconfigured, and taken down as needed. The practical and economical spirit of the industrial setting found in the modular, prefabricated components that make up the pavilion receives a playful twist, with a colourful, playground like image of the pavilion, that celebrates the nonconformist nature of the community.

Our design is made out of identical L shaped panels. Put together, they generate an ever expanding structure in a fractal pattern, inspired by the way the warehouses have been divided into multiple living units, identical but, at the same time, individualised, that together form an ensemble. While the possible ways to combine the modules are only limited by one’s imagination, we propose three variants that emphasise on different types of uses, while sharing some identical features, such as an open-air theatre and a watchtower from which the entirety of the district can be experienced by the observer.
End-Point
This plan creates a route through the middle of the pavilion which ends with the main open-air theatre, the spaces for workshops and other activities being present on the sides of the path. This arrangement emphasises the performance area, while also exposing all the other activities in an orderly manner. The watchtower marks the entrance in the pavilion and is a powerful landmark, being the first element people notice while approaching the pavilion.
Manifold
This plan is suited for a mixed use of the pavilion, with two different entrances and several clusters of spaces that, while separated, are linked visually to each other through the open areas. All the areas come together through the open-air theatre that is placed in the middle, and serves as the meeting ground for the different arts and activities that take place within the pavilion, and thus within the community itself.
Backyard
This plan is also based on the idea of a central corridor organising the space, this time leading to an open backyard area that can be used as an outdoor stage/performance space. With the natural background of the wooded space and the view from the street completely blocked, this space has a cosy surrounding, and an atmosphere that is thoroughly transformed from the exterior. The enclosed theatre being placed facing the main entrance, it serves best as an expansive exhibition area that immediately captures the attention of passers-by.