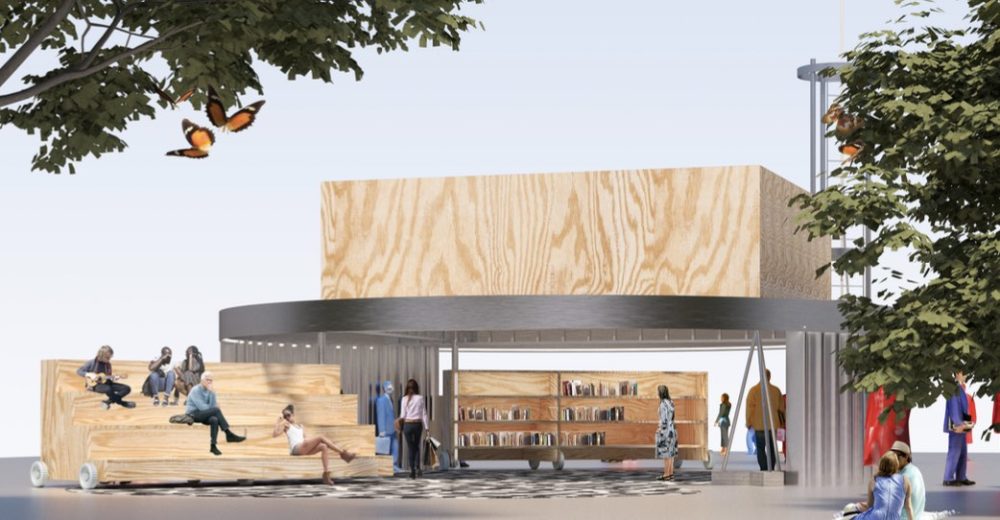 The pavilion is design to contains and support the variegated activities of the district, providing space for discussion for sharing of knowledge and for the exhibition of the artworks of the district. It will addapt to the needs of the warehouse becoming for instance a small cinema theatre where the movie makers of the district can present their works, or an open air music stage in which the artist rooster under the Rough Trade record label can perform music. Overall the structure is conceived ans giant cog, made out of rotating devices (curtains and stepped sittings) hosting the different functions.

London never stops to surprise. Hidden corners of the city offer a continuous surprising experience involving the great creativity of its inhabitants. Side by side with the mainstream cultural history of London, the DIY philosophy permeates the city, contributing greatly to the local and the global art industry. The Warehouse district in Tottenham is one example of this attitude. An incredible mixing of skills and creativity is concentrated in the district, in which artists from around the planet live and work, sharing their ideas and their indoustriosity with each other. The result is the creation of a hyper specific genius loci that is reflected by the exciting abundance of art practice that animate the warehouse district.
As young designers we empathize a lot with the inhabitants of the district, and we would love to contribute proposing a flexible structure, providing space for performance, reflection and sharing. The project we present, ‘Our Moon’ on occasion of the Totthenam pavilion is able to transform it’s configuration adapting to the many needs of the district.
A circular canopy supported by different devices creates an architecture mirroring the coral need for specificity and flexibility of the warhousers.
‘Our Moon’ is composed of fixed and movable parts, to allow a number of different uses and scenarios to happen. The structure is made by four steel beams, held up by metallic columns, holding a plywood box that covers the central space of the pavilion and that can be used as projection surfaces for cinema activities.
All the devices are conceived to perform rotational movement creating an idea of circularity that is designed to allow the sharing of knowledge and creativity. Artistic performances, cineforum, book club and local market are among the usage possible under the tottenham canopy.
The Moon will be visible around Totthenam attracting locals to join the warehousers for movie screening or for a concert
Hinged on the columns are two stepped seatings that can be turned to close off the central space, or that can be directed towards the outside spaces. To the opposite side of the steps, the staircase contains shelves that can be used as a library or for the market.
A camera hung to a helium balloon will record the everchanging uses of the pavilion. The balloon can be controlled climbing on a vertical stair. The overall structure recalls the industrial past of the warehouse and simultaneously reflects the ‘self made’ philosophy permeating the district. Plywood, metal, rubber are the materials composing the project, creating a collage of consistencies already present on site.