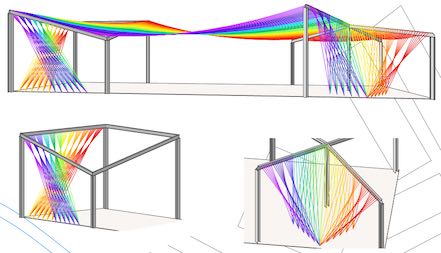 The steel structure recalls a typical industrial environment, which the Harringay Warehouse district once was. The shape of the roof is inspired by the nearby new river.
In addition to this merely formal relation, the connection with the neighbourhood is in the concept that guided the design, as I will describe later.

If gentrification is an impending change, the best way to react is by driving the change.
Those who live in an area subject to gentrification need economic strength, they need resources to maintain their homes and possibly buy them, before prices become prohibitive. In short, they need work.
Therefore, the layout of the space was left as free from obstacles as possible, for it to be used for the most diverse activities, including retail, professional training, fundraising, start-up organization and many other forms of cooperation.
Cooperation is foreseen in the construction of the pavilion itself: the necessary vertical partitions can be designed and created by one or more local artists, using the roof ropes or any other material they desire.
In this way, the pavilion would become an expression of the district’s creativity and would have a close link with the surrounding environment, an environment that is made by the people who live there rather than by the outward appearance of the buildings that lie on it.
The free plan also lends itself to activities open to the public, such as events and shows. For this reason, a reception desk and a stage for performing arts have been included in the proposed layout.
Since the pavilion is expected to be used during summer, the uncovered space near the existing trees can be used efficiently for various daytime or evening activities.
In order to use the space to gather and promote commercial, educational and creative activities, the project was oriented towards the maximum possible economy.
By saving as much as possible in the construction of the pavilion itself, the residual resources could be used to equip it with what is needed for its use, such as commercial stands and exhibitors for works of art.
For this reason, and considering that the construction will be carried out by voluntary workers, the construction system and the materials were chosen on the basis of absolute minimalism and simplicity.