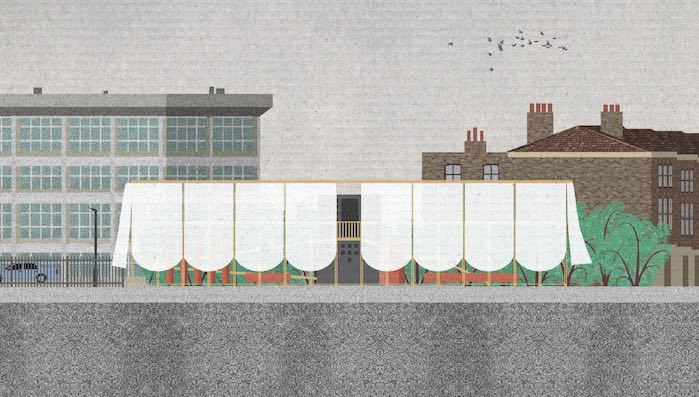 The project is intended to be developed through collaboration on-site. We provide the rough blueprint which we plan to develop and fill with new meanings together with the residents of the district. The rough blueprint we suggest to take as a basis for the development of the site is based on the cultural and visual fabric of the area, its past and its present. One of the references to the history of the district is curtains. It is a reminder of the industry that once dominated here and a reference to the small practices that occupy the area now.

Every person is a creator in their essence. One of the features of the creative personality is to make choices constantly. To choose a place of creative solitude or the space of a noisy crowd? We have to balance between madness and common sense, self-knowledge and the desire to absorb from the outside, movement and static, and, finally, a flight of fantasy and gravitational silence.
Developing the project, first of all, we proceeded from the metaphor of the emotional state inside the city space, which is most correlated with the internal state of a person. We can assume that we have chosen the path of functionalism, rather than form and context. Functionalism but not in its classical understanding which is tied to standardization but rather the reflective perception of space from the inside out, which is similar to the process of creating products of art. Combining this separating two typologies of space as two different states of a person, we came to parafiction. It stems a desire to distance oneself from the general urban fabric and avoid the consequences of gentrification. No, we do not make the pavilion a closed private club for the elite, we are changing the approach of space itself to a person – as an individual and not just as a social unit of society. Our space is not for everyone, it is for each and every person… How does the structure appear before us? From the first glance, it makes us confused, forces us to question: what is hiding behind this curtain? Depending on the needs, weather conditions and desired aesthetics, the curtain that is pulled down alternates between collectively sewn red fabric, like at a theater, transparent from recycled plastic that protects from the precipitation or reflective foil that keeps the space warm. They can be pulled down to the required length one by one or all together. Approaching the site, we understand that the structure under the curtain is a passage, a place to explore in length. The structure that hides behind the tall structure is a volume quite different from the first one. It is ascetic confinement for both creative solitude or heated debate on critical topics. While the character of the first structure is performative, the second one is inspired by the Romanesque fortress, its architecture language inherent to the north of England. In front of it is an inviting square with a clear social function of uniting the district into one point of attraction and stimulating communication among neighbors. The first floor of the pavilion has a passage to the courtyard. It also holds storage and dry bathrooms. This space can be filled with an exhibition or a gathering. You can get to the second floor going up the ramp that envelops the courtyard or the staircase attached to the curtain structure. The second floor is open and spacious.