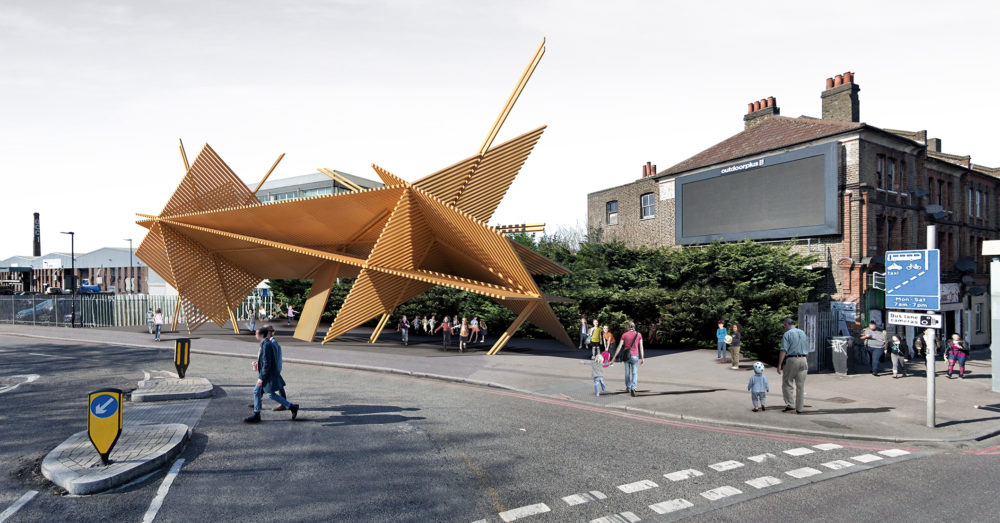 ‘UNO’ is a temporary urban intervention which has a double reference to the Harringay Warehouse District. The aesthetic connection is manifested through an homage to the industrial architecture of the past century: the inclined strong geometries of the pitched roofs are a strong living memory of history, which can’t be repudiated. Furthermore, ‘UNO’ wants to tell a story about the notion of a different state of living in the city (the ‘unauthorized’, in the sense of not following the rules of the real estate market) that forms a unique resilience response to gentrification.

UNO – UNAUTHORIZED NOTION OF OCCUPANCY
Premise
1 This project represents a mere contribution by designers to the urgent need of providing a community space for sharing thoughts about how to regenerate a city
2 This project does not aim at solving a problem the solution of which can be exclusively political
3 There are many pieces of built & unbuilt land within metropolis limits which are often left in a unfinished state – barren, abandoned, unproductive and unused
4 Between 1997 and 2016, the number of jobs in London grew by 1.6 million, an increase of 40%. Over the same period its population grew by 1.7 million, an increase of 25%
5 There’s a housing need and demand of 49,000 new homes each year, yet just 33,000 homes a year were built between 2013/14 and 2016/17
6 This means we need to look for a sustainable way of imagining the growth strategies of the city
7 Local communities are the heart of a city
8 They are extremely efficient locally in shaping the character of a neighborhood
9 They can provide different visions on how to reuse existing areas with different functional needs
10 Cooperation is the key behaviour to avoid gentrification and promote affordability for newcomers

UNO is
Without Facade
The facade of the temporary pavilion is to be left unfinished (or nonexistant), ideally according to all the culture and taste of the the inhabitants, who could potentially change the way the shelter looks

Without Land
The temporary pavilion is meant to be provided to the community members by the community itself, but they don‚Äôt own the site

Without Autonomy
Architecture depends on many different factors (politics, economy, technology, etc.), architects can provide an answer to the problem of housing need but not a solution to it

Without Program
The temporary pavilion have no specific function, if not providing a physical space It can accommodate people sleeping, eating, learning, praying, or even selling goods

Without Permanence
At the end of its use, the temporary pavilion can be dismantled It can erected somewhere else, extending its unfinished lifecycle at will

Without Authorship
The temporary pavilion has no predetermined outer appearance, if not the starting one It can be customized at will by its users

Without Regulations
The temporary pavilion is an unfinished structural system that can be assembled, used or aggregated at will according to its own specific culture, every community of inhabitants will establish rules shaping and governing the space