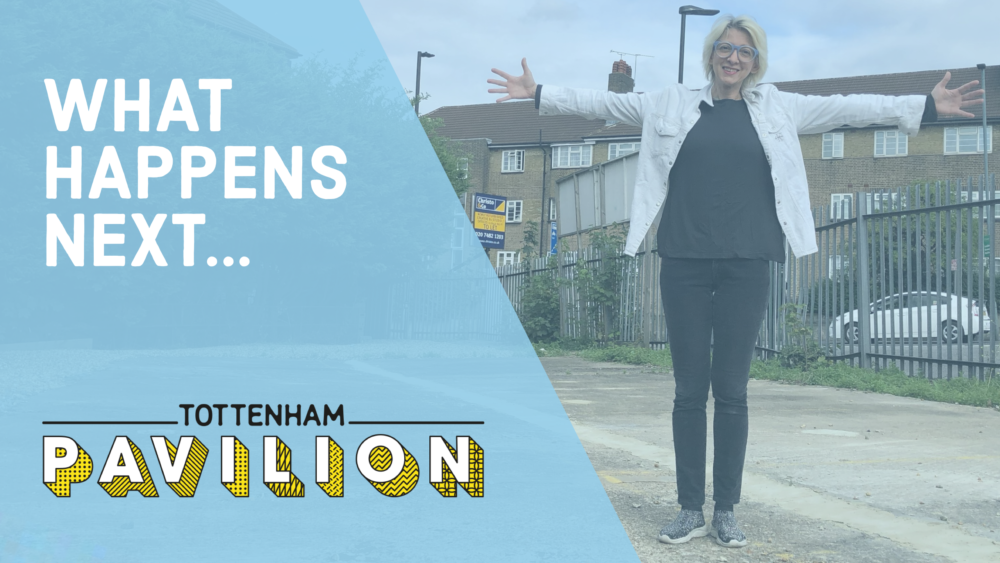 Now we know the winner, the next phase is about shaping the project and checking it is something people will value on their doorstep.

I am Carolina Khouri, I’ve lived at 1 Overbury Road since 2009 and Tottenham Pavilion is my idea. I was inspired by the Summer Pavilions at the Serpentine Gallery and I’ve thought for a number of years that it would be great to have a warehouse Pavilion, an outdoor meeting space for warehouse residents and local communities nearby. Last year I invited James West, who lived at 3 Overbury Road (2008 – 2015) and Joe Wright who worked from New River Studios (2014 – 2019) to help me on the project. Together we have all volunteered and self-funded the project, to date, to try and make it happen.

As organisers, we promoted the opportunity locally and wider afield – yet at no point did we know where this project was going to end up. It’s a very peculiar thing running a competition – especially one like this that captured such unexpected international attention. For months we’ve seen designs being submitted, looking at each and imagining what it might mean for warehouse residents, local residents and participants at events. We’ve looked at the designs, considered the concepts, talked about the opportunities…all while knowing we’ve delegated the job of judging to both the local community and a panel of judges.

So when, a week or so ago, the final design was chosen it was a brand new feeling – a feeling of arrival, a feeling of focused minds, a feeling of starting to see what the project could behold.

A Shared Hall & the Festival of Making is bang on the brief. We wanted a design that reflected the way the Harringay Warehouse District has been developed – through a series of self-build conversions of warehouses, a piecemeal approach that reflects the diversity of interests and the way the area has changed overtime. We wanted a design that would let people get involved, that would create a space for people to host events and create gatherings. It needed to be flexible and able to evolve with whatever activities happen on the site.

We also wanted it to make a statement about warehouse life – to say to our neighbours that we’re different yet welcoming, that our alternative way of life is something that should be protected, that warehouse life is here to stay. In 2019, we held a pilot project on the same plot of land with funding from the Mayor of London which allowed us to pay warehouse residents to run workshops. The workshops were attended by people from the Warehouse Disctrict, Seven Sisters Rd and Woodberry Down Estate – people really rated the chance to meet warehouse residents and get involved with, what some described as, a rather hidden community. Our motivation is not so hung up on the phrase ‘gentrification’ or ‘gentrification-disruption’ – that was a design theme – rather it’s about creating a space to open up discussions, host small events and allow us all the opportunity to create new connections. This site won’t be available forever, which is why we’ve decided now is a good time to try and see if we can make a Pavilion project work.

We’ve heard a lot already from warehouse residents, objections, concerns and positive suggestions, and have insights from last year’s pilot project. Phase 2 is about us taking time to combine ideas and come up with a Project Proposal that would see the Pavilion built using the winning design. We’re keen to make sure it is not just about the structure (which will be a temporary installation anyway) – rather we want to create a project that brings funding into the area, not just for the Pavilion but also funding to pay warehouse residents to run workshops, host exhibitions and hold small outdoor events (keep an eye out for event / activity callouts coming in July).

We also want to explore what else could be developed on the site while it’s still available for community use. For example, the most obvious is using some of the funding to get a water supply installed to enable planters and gardening on the site.

Whatever shape the project takes, it will be shared with anyone interested. Phase 2 is very much about listening to feedback, considering changes and seeing if there’s enough consensus to move forward to fundraising. We’ll also talk further with people like our landlord, Provewell Ltd, and local planning to check the idea is still within scope.

Nothing is set in stone.